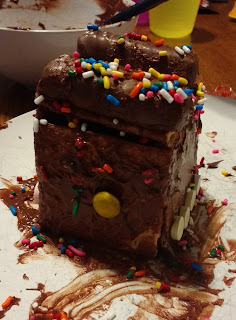 Z decided that she wanted to make some houses out of her Halloween candy.  After perusing the internet for some ideas, we decided that the best route was to use graham crackers as the base of the house. and use frosting for glue.  (I wasn't against the idea of using cardboard, but she really wanted to be able to eat everything.)  She drew out a whole plan, and gathered up the ingredients. 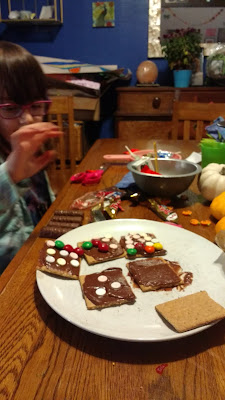 First, I made some chocolate frosting with melted chocolate chips, butter, coconut milk, and powdered sugar. (We just did a small amount, so probably about 2 handfuls of chocolate chips and about 2 1/2 Tbsp. of butter.)  Then I experimented with a few ways to get the house to stand up.  I ended up using frosting as cement on the plate, then using a cracker as the base of the house, smushed the 4 sides around it.  It took more effort than I expected!  Then, I let Z start on her house, mostly with decorations. 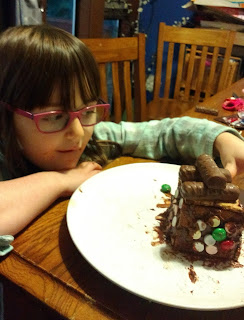 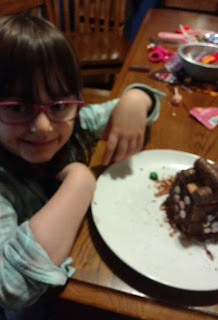 After carefully getting the roofs (rooves?) on, they needed a bit more to stay stabilized.  Since we had already unwrapped so much candy, we used some Twix to hold them on.  I threw some sprinkles on mine, and Z looked for ways to make lollipop trees stand up.

Peppermint patties were the perfect size and consistency to act as tree bases.  (and since none of us really like them, it wasn't such a loss.)  The M&Ms were a little too heavy to stay on as decorations, but we persevered!

Posted by Dana, Founder of Crafty Cakewagon and The Creative Parent at 3:07 PM