My kids eat a lot of fruits and vegetables. Like A LOT.  I've been asked how I've gotten them to this point, and really, it's just a couple of things.

1.) Exposure: I put veggies in most of our foods, sometimes in excessive amounts.  We have cut up veggies and fruit for snacks, usually with a string cheese or some nuts.  I've read that people need up to 30 exposures to a food in order to like it, so we try lots of different things.  In our morning eggs, we typically have mushrooms, spinach, and some veggie sausage.  Today we had some leeks, so I put those in too. (Soo good!)  Once in a while, I add broccoli or bell pepper, but those get mixed reviews from Zizi.
2.) Cook with them.  When kids make the food, they are more likely to try it.  My guys are really interested in cooking, and want to help most of the time.  This morning, Sage stole an egg before Zizi could crack it, and cracked it himself... all over the counter.  I think he'll be ready to learn for real in about 6 months, but I admire the effort!  Sometimes I wear him on my back when I'm making dinner, so he can see the stove, but is still safe. He loves that!

They don't always want to cook with me, but I give them lots of opportunities to help or just watch.  When Sage was smaller, I would wheel his highchair into the kitchen so he could see what was happening, and he would be contained.

These are a few books we've used this year: 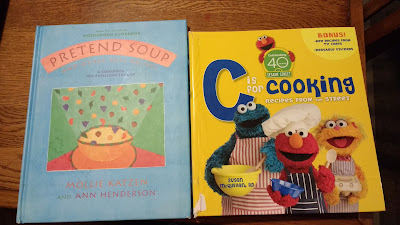 Pretend Soup has lots of step-by-step pictures, so kids can see what to do next, along with parent-friendly instructions all on one page. (I got it at Half-Priced Books for around $5.) Z got it for her birthday a few weeks ago, and we went through it before bed one night.  The next day, she decided to make her own salad, and cut up most of the veggies on her own.  Then she demanded to make lemonade from scratch, since we had some lemons.  I wasn't really in the mood for lemonade, but she squeezed the lemon and added water herself.

C is for Cooking is a relatively old kids' cookbook that is super cheap on Amazon. ($2 as of this writing).  It's got tons of pictures and has cute names for recipes using the character's names, like "Cookie Monster's 'Me Stuffed' Potatoes" or "Oscar's Quick Dip in the Mud" (chocolate-fruit dip).  We've made a few things from it, including some delicious blueberry bar cookies.

3.) Play with food.  There are TONS of recipes and pictures out there of fun animals/monsters/scenes you can make with vegetables and fruit. We sometimes even do science experiments with food!  Once, we tested out celery and colored water, to see how it sucked up the water. (Honestly, that one didn't work so well.) Amazing (Mostly) Edible Science has some really great experiments, usually with sweet foods. 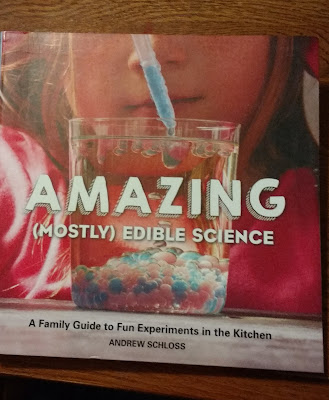 4.) Give them access to snack foods.  When Zizi is hungry, she gets in the fridge.  Usually the first thing she wants is a pickle or olives.  (She has eaten half a jar of olives in one sitting before.)  I keep leftover chickpeas and beans in jars in the fridge, and the veggie drawers always have things they might eat in them.  Right now, I have: apples (Sage's favorite thing), mushrooms, carrots, celery, and spinach.  Yesterday, I left the room for a few minutes.  When I came back, Sage had put some old sugar snap peas in the stroller, and was walking them around the room.  (My house is kind of a ridiculous place sometimes.)

5.) Give lots of choices: When we try a new food, I give each kid just a little bit.  It doesn't always work, but sometimes they like it right away.  Winter squash is still a hard sell around here, but after I got a spiralizer this summer, they both will eat zucchini if it is cut into zoodles!  Sage is a real fruit lover, but still doesn't eat that many veggies on their own. But, after lots of tries, he now will eat raw carrots, sugar snap peas, and sometimes cucumber or celery.  Don't give up!
Posted by Dana, Founder of Crafty Cakewagon and The Creative Parent at 12:42 PM