Still in the middle of my "This house is too dark, let's do a Spring redecorating!" projects.  This one focuses on curtains for the dining room.
I really like our dining room, but the boring brown curtains (that came with the house) were, well, boring. And dark.  So, out they go!  I went to the fabric store hoping to find something that wasn't transparent, but wasn't heavy either.  Linen would be ideal, but I really didn't want to pay that much.  Enter colored burlap!

It was $3.99/yard, so waaay under budget- with my coupon, I paid about $2.40/yard.  I also planned to get a slightly darker/more turquoise color for an accent across the top of the curtain rod.  Total project was under $35! 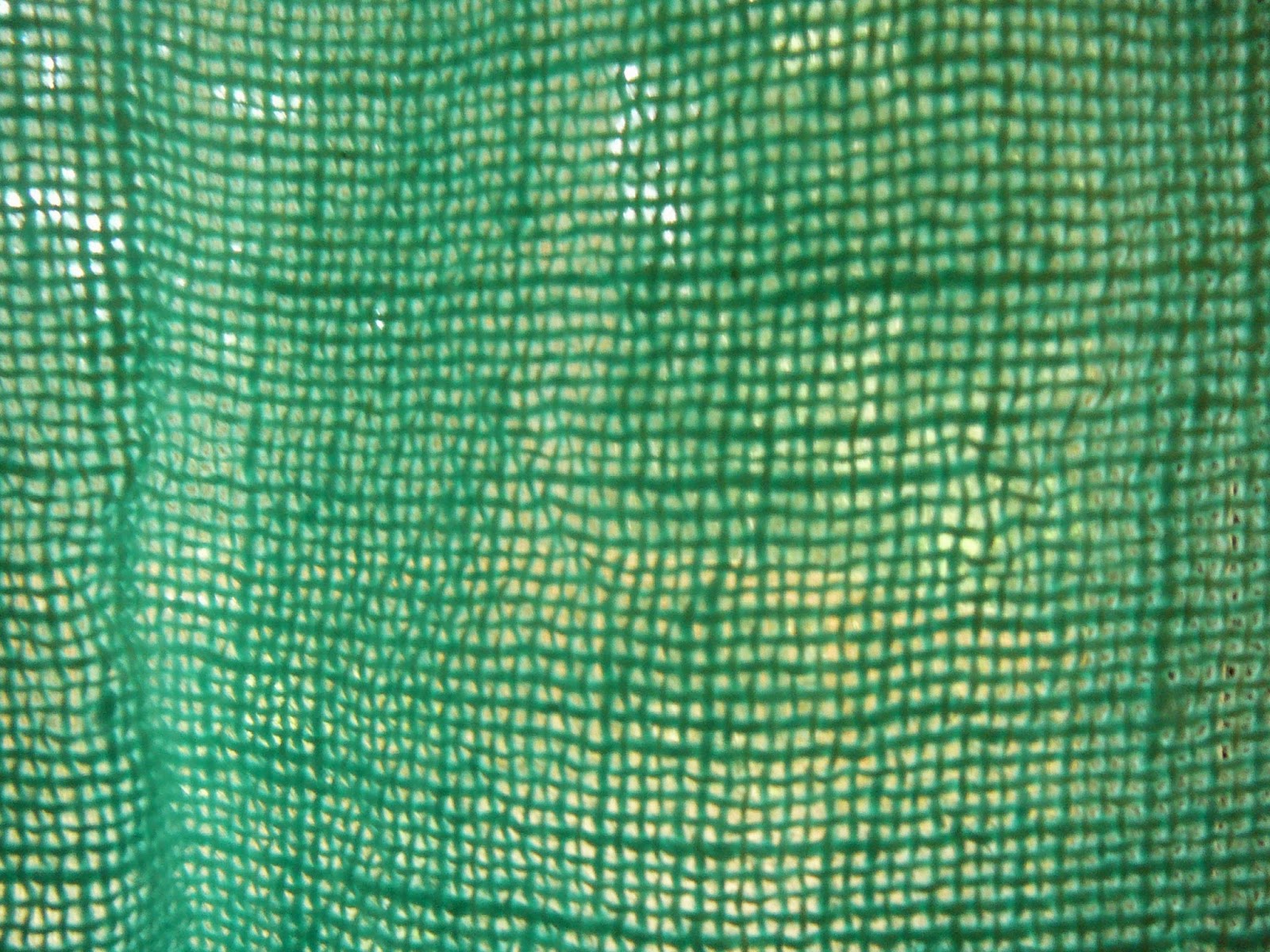 I have never worked with burlap before, and I wasn't sure how hard it would be.  To start with, it gives off a large quantity of dust/chaff/lint/what have you.  I had to move it to the trunk to drive home because I was coughing (and slightly worried that I might be allergic to my new "experiment").  Looking online, I found several people who had successfully washed it in a regular washing machine, so that's what I did.  I cut it in half (so only 3 yards at a time instead of all 6), washed it with half the normal amount of soap, and dried it.  (Cleaning out the lint trap several times, as well as large amounts of buildup inside the dryer door.  No, I'm not kidding!)  Then I washed/dried it a second time.

The amount of lint that was removed is astounding.  This stuff shed more than all of my pets during their entire lives put together!  But, the smell was gone, and so was the feeling that I needed Allegra, so all is well.  The fabric was a lot softer too, and it seemed like it would be easier to work with now.

The fabric edges frayed a lot, but I don't really care.  I trimmed them, folded them over, and pinned.  I wanted it to look sort of rustic, so if things don't match, it's ok.  However, once I got both sections hemmed, I realized that one section was about a foot longer than the other.  Oops! 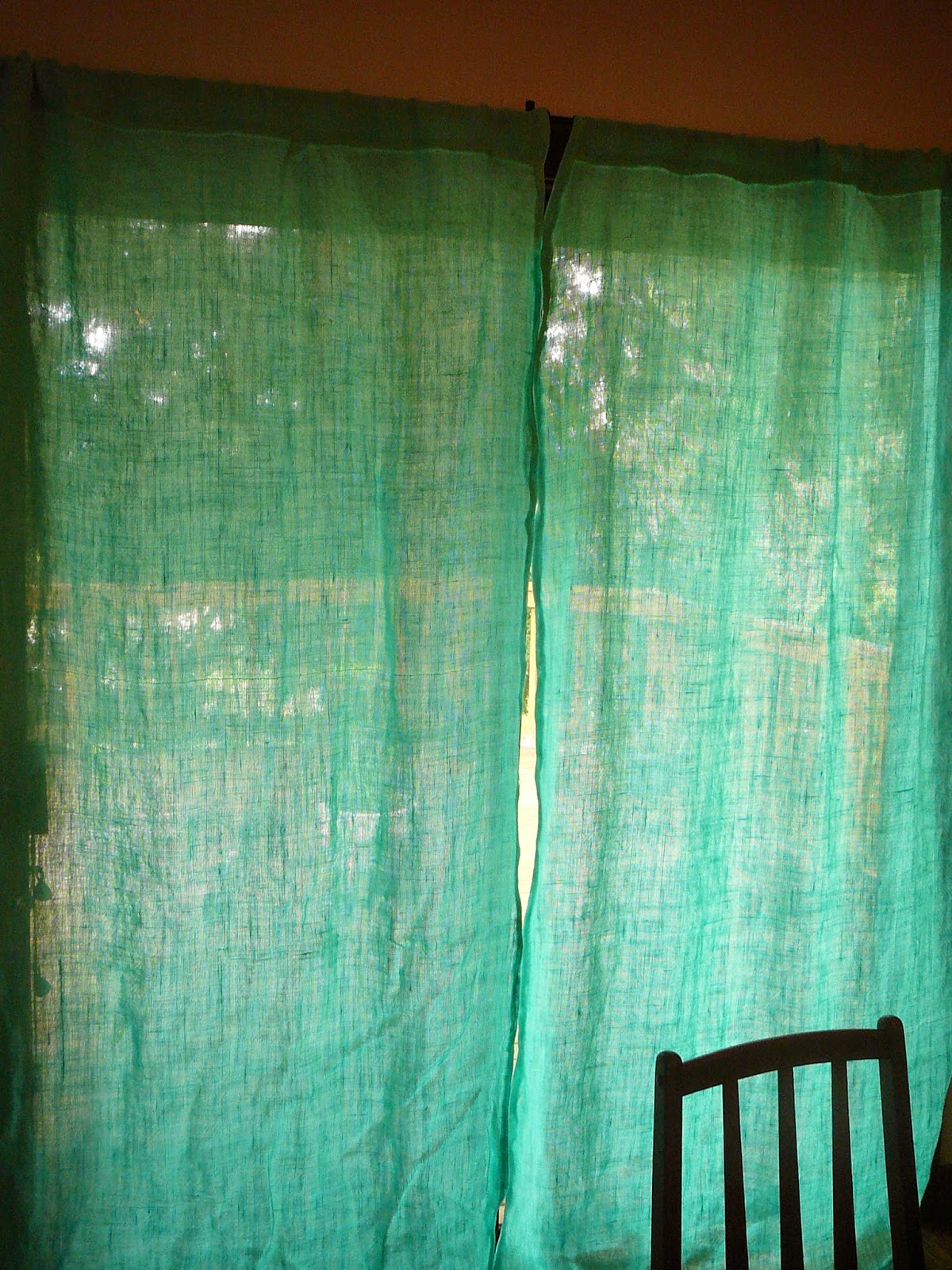 I hung them from the curtain rod, so that I could see how noticable the difference would be.  Then I cut the longer one again to even them out, made a casing for the top, and called it good.

All in all, I totally recommend using burlap for household projects.  It's cheap, and once you get past the cleaning, relatively easy to work with.  (Waaay easier to sew with than that nightmare metallic stuff that I useds for Zizi's flapper dress.)  The only slight trouble I had was when I'd already hemmed it and was making the casing- because it was so thick it didn't want to go through my machine.  I backstitched part of it (starting further ahead) and did part of it with my sewing machine foot up, and it worked just fine.  And it comes in colors!  I wouldn't use it for a blanket or anything, but curtains or a table runner is really great.
Posted by Dana, Founder of Crafty Cakewagon and The Creative Parent at 10:54 AM