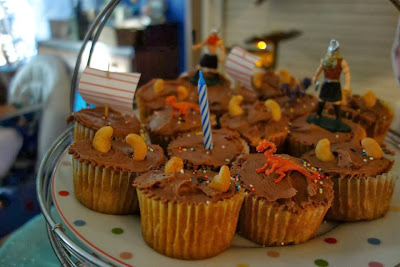 Zephyr's first birthday party was in early October, and the theme was Vikings!  I made some yellow cupcakes with chocolate mousse frosting, and covered them with cashew Viking horns, mini dragons, and comedy Vikings (I swear I got a picture of this, but I couldn't find it... a large portion of the Vikings were scantily clad.  Like black underwear, and nothing else but a sword.  At least 75% of them.  It was like something that would happen to the Bloggess.) 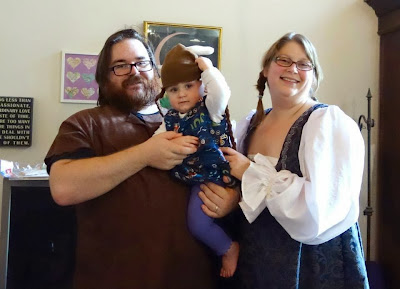 But that is neither here nor there.  Today I'm going to talk about the labor of love that was my costume. 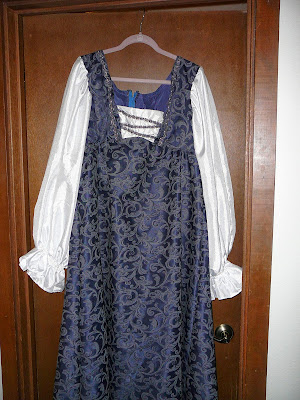 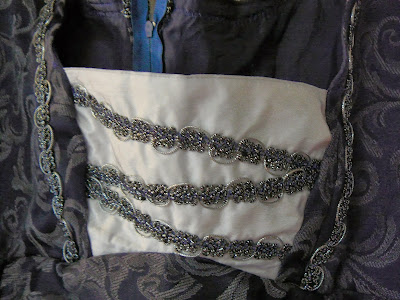 Ignore the fact that the zipper looks like it is the wrong color (it is actually the wrong color).  This dress was a huge undertaking, and one that I finished actually much faster than anticipated.  The sleeves were easy, and the skirt (while huge quantities of fabric) was also pretty easy.  What was not easy?  The fact that when I bought this pattern sometime in the 90's, I didn't realize that patterns came without every size in them- i.e., this pattern was 3 sizes too small for me, even before I had a baby. 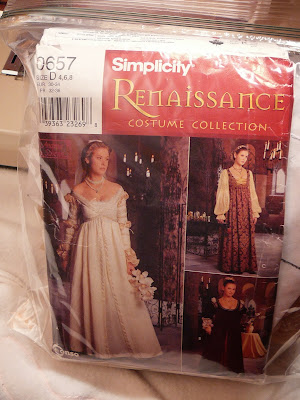 I looked to buy the bigger version of it, but it was exorbitantly expensive.  And you know, time.  So, I busted out my math skills, and made entirely new pieces for the bodice parts.  That's right, using some paper and a ruler, I sketched out new pieces for all of the blue bits on top.  And it actually worked!  After completing this dress, I decided that I can pretty much sew anything that I want to.  (except jeans. And why would you want to sew those?)  Next Viking post? The hats!!

Posted by Dana, Founder of Crafty Cakewagon and The Creative Parent at 10:40 AM No comments:

I was thinking today.. .it's been forever since I've posted here.  The garden is beyond done for the season (although I'm still feeding birds, esp. since my fuschias died a bit early- gotta refill that hummingbird feeder!) and what am I cooking? Mostly waffles.  And pies.  We had Pietacular a few weeks ago, and I think I got 2 pictures.  I have been crafting A TON as of late though... 4 pairs of pants for Z, two dresses and a belt for myself, needlefelting a chipmunk (and probably some Christmas gifts too), made a dress for Z cuter, plus all of the amazing Viking costumes (and hats) that we had for Zephyr's 1st B-day party in the beginning of October... it's been piles of fabric around here lately!  So, soon, I promise, I will put up some pictures of it all!  (and fun Christmas garlands, and I also finally FINALLY finished lining a coat of mine from college that I've been working on for at least 6 years- and oh yeah, now it doesn't fit anymore..)

That's pretty much what's been going on around here!
Posted by Dana, Founder of Crafty Cakewagon and The Creative Parent at 1:28 AM No comments: