Alpacas! Everything you wanted to know... 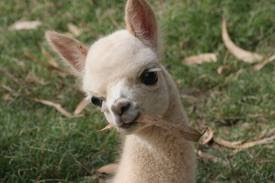 One of the classes that I went to at the Mother Earth News Fair a few weeks ago was on alpacas.  It was by Barbara Banks, from Apple Country Alpacas in Rochester, WA.  No, Redmond does not allow alpacas in backyards, as far as I know; but one day on my Dream Farm we will have them!  They are so ridiculously cute, are good to the land, and there is an alpaca fiber shortage- so there will always be a place to sell their wool.  Interested? Here are some more things I learned about alpacas. 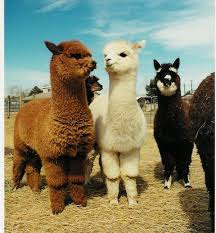 They are herd animals, so you should have more than two of them.  I'm thinking 4-6 would be a good plan, you can have about 6-8/acre of land.  They live for around 20 years, and weigh between 125 and 175 pounds.  Since they are used to being in the cold of the Andes Mountains, our climate is not so bad for them.  You clip their fleece once a year in the spring, and it's so valuable that about half of it will cover the cost of their care for the year. 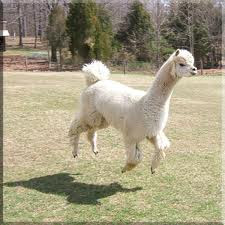 
When they are happy, they bounce around like Pepe Le Pew.  It's called "pronking" :) 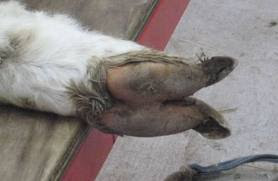 
They don't have hooves, they have soft feet that are essentially two big toes.  You trim their nails once a year too.  They can be companions with goats, sheep, donkeys, horses, cats, dogs, and llamas.  Sometimes people keep a llama with them as a "guardian animal"; I'm not sure if alpacas are kind of dim, the speaker was saying that when they sense danger, they make an "alert" noise- but then just stand there making the noise.  With a llama in the group, it will run away from trouble, and lead the alpacas with it. 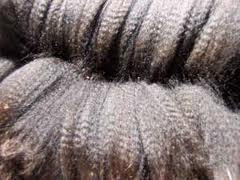 Their fiber is very durable, renewable, and sustainable.  Even the bits that might not be good enough for spinning could be turned into felt rugs or garden paths.  They are used to eating grass, but don't actually rip it out of the ground like other grazing animals do.  They only have bottom teeth, so they don't bite, but they can spit at you (like camels).  Even their fertilizer is supposed to be excellent, "I've heard that it works especially well on a plant that was recently legalized in Washington state," the speaker said, cryptically.  And have I mentioned, they are super cute?!  If I get my way, alpacas will definitely be in our future one day.

Posted by Dana, Founder of Crafty Cakewagon and The Creative Parent at 12:25 PM