Last year for my birthday, I got one of those awesome mini-pie bakers. 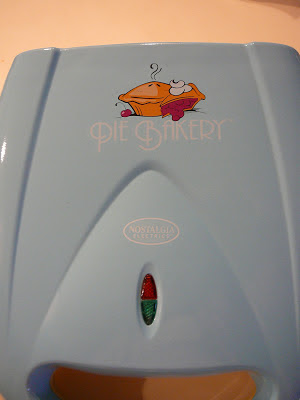 It's essentially a waffle iron that makes little pies.  It had been stuck in the cupboard until last weekend... and now it's going to see a lot more of the outside world. 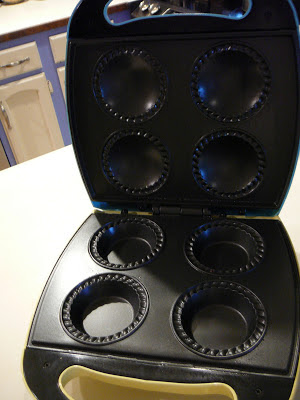 I declare this to be the Summer of Pie!  First, I found a really great crust recipe (Trader Joe's, your frozen crust has let me down too many times!). I was thinking that it should be all butter, but then I read that even Julia Child says that you should mix butter with shortening, so that became the plan.  I used the crust from this book, (from this bakery, originally) using butter and vegan margarine as the shortening, and using 2 c. white flour + 1/2 c. whole wheat flour for the 2 1/2 c. it calls for.  (I guess that book might be out of print now, since it's so expensive.  This is a very similar recipe, just do 2/3 butter+ 1/3 shortening.)  Divide crust into two mounds, and refrigerate for at least 2 hours before using.  Then roll out the dough and cut circles out of it; a larger one for the bottom, and a slightly smaller one for the top.  These four pies used 1/2 of this amount of dough (so one crust's worth).

Then, I pulled out my trusty pie book, and adapted the filling amounts to make it work for a mini pie.  Since John and I have VERY different tastes in pie (I like every berry, cherry, summer fruit you can think of; apple and pumpkin are his two favorites) I made just enough filling for two pies of each flavor; peach for me, and apple for him.

I mixed these things together, and microwaved them for 3 minutes each (just because I didn't know how well the pie baker would cook raw filling). I heated up the machine, put the bottom crust, then filling, then top crust, and closed it.  Pies were done in about 10 minutes!! 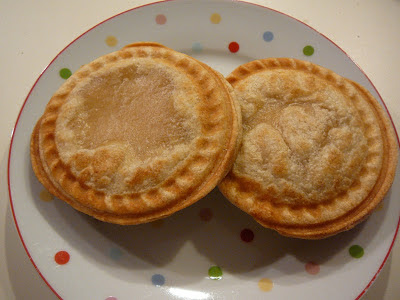 The only difficulty I had with this machine was that it was very difficult to see when the green light was turned on (signalling that it was done).  I had to turn off the kitchen light and be in the dark to know for sure!  I also don't think that you could do an open-top pie, like pumpkin, in this.  Next time, I think I'll top the pies with a little bit of cinnamon sugar, but these were super good. :)
Posted by Dana, Founder of Crafty Cakewagon and The Creative Parent at 10:28 PM