Having an eclectic garden is not something that I set out consciously to do, it just sort of happened.  Really, I've always had a plant or two around, but it never turned into much until I lived in Los Angeles.  There, I met a lady named Joyce who changed how I thought about homegrown produce, particularly tomatoes.  She was my boss at the Pasadena Playhouse, and my first day of work, she brought in a bag of heirloom yellow tomatoes that changed my life.  I put them on a pizza, and it was the beginning something huge for me. I wanted to grow things.

At the time, I lived in a very dark apartment, with a balcony, but (ironically for California) no sun.  Then I moved into a duplex with a huge backyard, and started growing veggies with a passion.  I hauled bag after bag of "soil amendment" (probably just compost, but that's how they labeled it then) into my backyard, and I tried to grow carrots (big mistake), potatoes (also a no-go), herbs (relatively successful) and tomatoes.  My biggest success?  I grew canteloupes under my kitchen window.  Freaking canteloupes!!  They were the most amazing canteloupes I've had in my entire life, even if they were only the size of grapefruits.  I still dream about them.

Joyce had a giant backyard in North Hollywood.  She had citrus trees (including a blood orange tree), a giant avocado tree (that she fought both the squirrels and the dog in order to get any to eat), and bed after bed of the tallest tomato plants known to man.  They were taller than she was, which, while most people were taller than Joyce, to have a 5-foot tall tomato plant is still a wonder to me.  She would grow a constant supply of lettuce that could easily turn into a bowl of salad for dinner.  She was like a surrogate mom to me, in my home away from home. 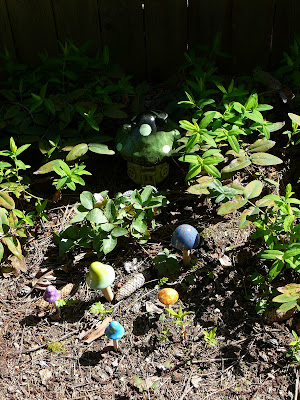 Later on, her boyfriend installed a remote controlled train in the corner of the backyard.  It had a tunnel, plants all around, and even a waterfall, if I remember correctly.  It's been a long time.  I kept in touch with Joyce after I moved back to Washington, but a couple of years later, she was diagnosed with cancer.  It was really serious and she had some experimental treatments.  She lost her hair.  I went to visit, and we snuck into her friend's pool when they weren't home.  I kept having visions of being carted off to a police station in my bathing suit, but the friends really didn't mind when they caught us.  She had been recovering for over a year.  Her hair was growing back into first "the Jamie Lee Curtis" and then into "the Annette Bening". 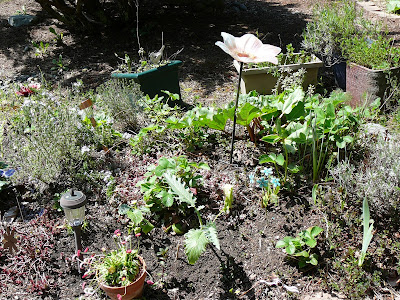 I didn’t hear from her for a long time, but that didn’t really worry me since her voice was still on her answering machine.  Until the day that I accidentally called her, (my phone misdialed) and found out from her boyfriend that she’d passed away.  The cancer had come back, and despite everything, she’d lost her fight.  That was a little over two years ago, I think. 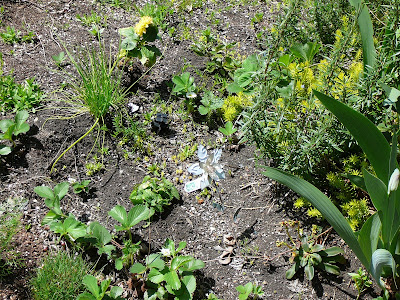 I really didn't plan for this post to turn into a tribute to my friend, but that's where the roots of my gardening as an adult started (no pun intended).  (Gardening as a kid though? That’s a whole other story…)   Even though Joyce’s garden wasn't that crazy, in terms of decoration, it was in terms of awesomeness. And that's the legacy I hope to carry on.  So, when my neighbors think I’m weird for growing edibles everywhere, and offer to show us pictures of how our bark-covered hill used to look (“when it was nice” i.e. just bark), I have to take it with a grain of salt.  Because I love my eclectic garden- weird sculptures, giant rhubarb plants, and all. 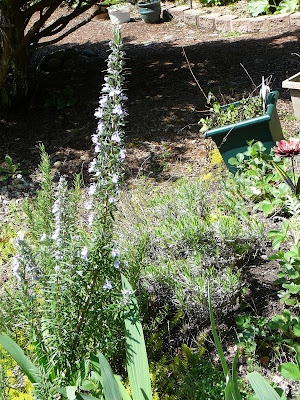 I’ll have to show you my recently acquired “solar duck” really soon.  I named her Petunia.  Maybe her middle name will be Joyce.
Posted by Dana, Founder of Crafty Cakewagon and The Creative Parent at 11:30 AM