Sunday: Peanut Coconut Curry with Jasmine Rice
Monday: Roasted Veggie Salad with Chickpeas and Cheesy Bread
Tuesday: Eggplant Lentil Chili Mole (from Appetite for Reduction)
Wednesday: Mushroom Soup with Hazelnuts and Farro (see below)
Thursday: Indian Lentils with Caramelized Onions and Rice
Friday: Lemon Pepper Salmon, Rice, and Kale Salad
Saturday: Vietnamese Noodle Salad with Tofu
(note: this is not the actual recipe for Saturday's meal, but it is pretty much the marinade recipe.  The whole thing is from Appetite for Reduction, the book I use to start each week's planning.) 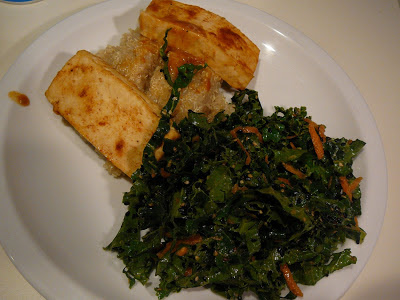 (Here is that lovely kale salad again, that I just can't get enough of.  I think we've eaten it every week for over a month now!  This was the first time I made it, with some spicy baked tofu and quinoa.) 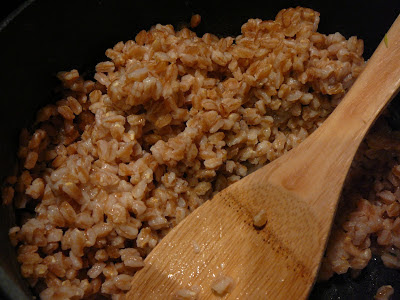 This is your new friend, farro.  It's having kind of a "whole grain" moment right now.  What I like about it is that it's kind of like a wheat version of brown rice, and it's got a little bit of a pop to it, like barley does when you bite into it.  And, although they say that it takes 40 minutes to cook, I've managed it in around 20 (especially with the "unpearled" kind- that's the better one, and it's grown in Washington!).

I am not really a mushroom fan.  Really.  I hated them for the first 30 years of my life.  Then someone brought a mushroom/wild rice soup to work for a potluck day, and it was delicious.  I had to make it.  It had butter and white wine, who can say no to that?   Then I found a recipe for a stew with portobellos, peppers, and tempeh, and that was great.  Now this; I totally adapted it from Sunset magazine, so it's really mine.  My trick is to chop up the mushrooms really finely if they're going to stay in pieces in a dish.  This one is blended, so it's really just the flavor, and I swear that flavor is not "dirt".  :)

Mushroom Soup with Hazelnuts and Farro
adapted from Sunset magazine

Other things from the original recipe that I would have added if they were in my house:
2 ribs celery
1/4 c. dry white wine
fresh chives instead of dried

Roughly chop up the veggies,  and saute them in your soup pot with the olive oil and garlic.  Add the beans  and the broth.  Meanwhile, cook 1 c. of farro as directed.  (Rinse and cover with water, boil until cooked, 20-40 minutes)  Simmer the soup until the veggies are tender, then blend with an immersion blender.  Make sure that it's really smooth.  Then add the cream and rosemary, and blend again.  Take your hazelnuts, and toast them at 400* for about 10 minutes.  After they cool, chop them up, and blow on them to remove the skins. Serve the soup over cooked farro, with hazelnuts on top as a garnish. 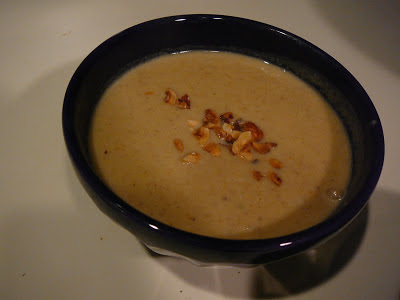 Posted by Dana, Founder of Crafty Cakewagon and The Creative Parent at 1:38 PM