I know what you're thinking, "It's winter, I don't expect to see much growing outside.  Unless it's something of this plastic candy variety": 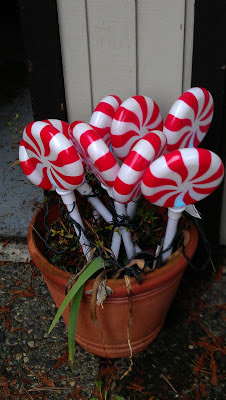 But this is not true! Just look at my hellabore from last year that's decided to bloom!  These lovelies will have flowers from now until pretty much the beginning of summer.  Guess that's why they are so pricey most of the time. I got a pretty good deal at Home Depot last year, for around $10/plant, so I got 4 of them.  This is the only one blooming right now though, so hopefully the others will come back soon.  They grow well in the shade, and are perennials, so this is a double win for my front yard! 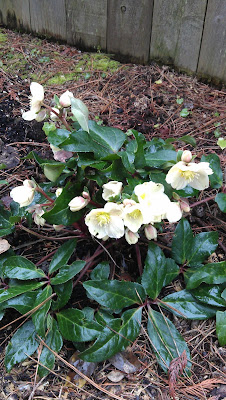 Also blooming right now? Primroses.  I have some that I bought the first year we moved into this house, and they're still around.  Not blooming quite as well as these new ones, but to survive four winters? Pretty impressive.  Also impressive? The price.  I got these 10/$10 at QFC.  They're starting on the side path in my Alice in Wonderland garden, that's still taking shape.  So far I have two large teacup planters, some small rose plants, some violets, and a small caterpillar sculpture.  I'm trying to stick with lots of red and white for the flowers, with fun garden art and signs to come. 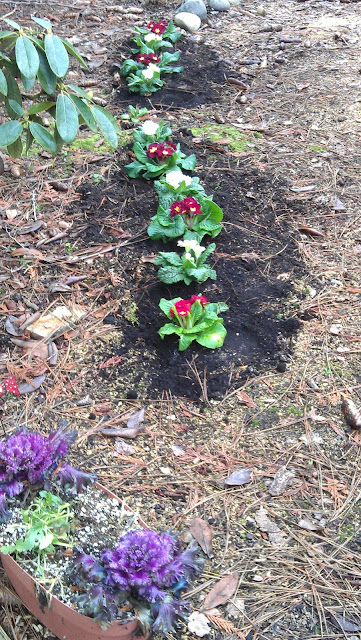 Oh, and that ornamental kale is still hanging in there too!
Posted by Dana, Founder of Crafty Cakewagon and The Creative Parent at 11:56 AM