A month or so ago, I went to the farmer's market specifically to get some potatoes to seed.  What does that mean? I picked the coolest varieties I could find (note the purple ones) and chose ones with lots of "eyes" on them.  Then, I stuck them in the cupboard in a large bowl until they started to look like aliens from another planet... or at least kind of like succulents.

Now I've cut out the sprouting bits, and am letting them sit like this for a couple of days to "cure".  Usually, I cut them and throw them straight into my giant potato pot and cover them with dirt... but the last time I tried that, it didn't work.  So, now I'm trying this method. 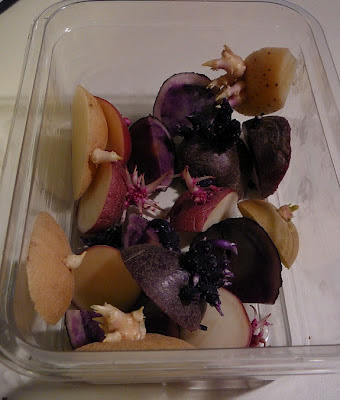 After they've cured for a couple of days, (I'm assuming this means that they're not wet any more) you can space them out in a giant giant pot, make a potato tower like Mavis does in 100 dollars a month, or put them in the ground (although I think that only works if you have really workable soil.)  Put them way at the bottom of your pot, and only cover them with an inch or so of soil.  Don't fill the whole thing at once!  Once they sprout through the soil, cover them again. Apparently, you can get more potatoes if you alternate covering them with soil and then adding some straw or hay.  Since I still have piles of hay from last fall, this is not a problem for me!  If you're making a potato tower and you want it to look extra fancy (and keep in some more water, esp. in hotter weather) you can wrap it with some oilcloth like Stacy from Seattle Seedling does.  (I'm totally doing that next year when I'm more mobile and have some chicken wire on hand.)  So far this year, I've managed one potato harvest of about a pound and a half of potatoes, so here's hoping that this one does better... even if it is growing over the winter!
Posted by Dana, Founder of Crafty Cakewagon and The Creative Parent at 8:00 AM