So, after reading this post from You Grow Girl's Gayla Trail, I decided that I was ready to take the plunge this year and start seeds inside. We have a pretty big garage, but it only gets about 1% sunlight, so a real source of light was a necessity.
We went to the Home Despot, and I found a 5-shelf metal bookshelf for under $100. Then, I purchased 6 black trays for the seed starts (thinking I would fit 3/shelf, and use 2 shelves to start), 3 sets of peat trays (kind of like egg cartons, but deeper individual spaces), 1 bag of potting soil, and 4 sets of florescent light holders. The lights I got were T12 size, and general daylight ones. (She suggests doing one daylight and one cool, but I just did the regular full-spectrum ones.) I also got a ridiculously complicated and somewhat expensive timer, that despite programming it for 15 minutes, still does not actually turn itself on. :( I need to reset it and try again.
Here's what it looks like: 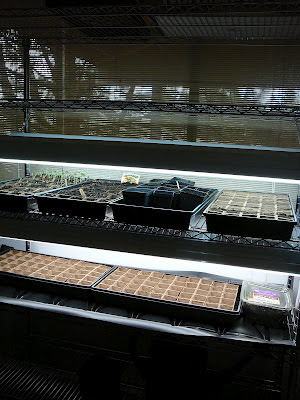 We put the lights hanging from the #2 and #3 shelves, with waterproof trays underneath them to protect the other lights. By the time I was ready to set up the second shelf, they had sold out of the trays though (and I wanted 2 more), but I found this magical sheet of plastic thing over in the "builder" section, and it fit just fine. It's probably meant to go under a car for some reason; just my guess! 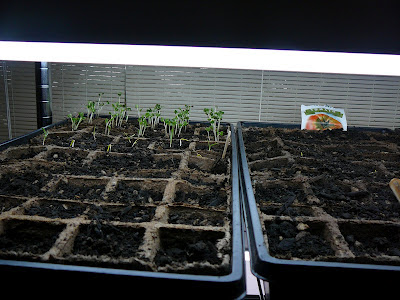 I have now officially started 250 small plants (can you believe it?) plus another tray of lettuce, 6 more artichoke plants, and several tomatillos! (The "small" plants include around 60 lavender, 40 various squashes, many tomatoes, spinach, kale, watermelon, more artichokes, and I'm sure some other things I'm forgetting!)
This is where some of the plants will go when they're ready to go outside. I'm also planning to start some peas here soon: 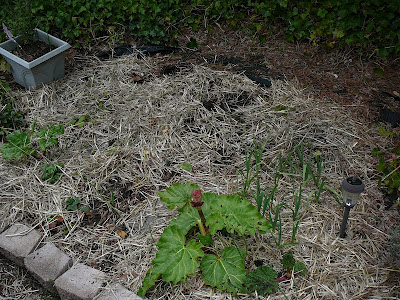 The right side is already full of rhubarb and garlic, and the front of the left side has strawberries, and possibly another rhubarb plant. It's kind of ridiculous how much rhubarb I grow!
Posted by Dana, Founder of Crafty Cakewagon and The Creative Parent at 4:56 PM