Where did last week go? And how did I not write anything here? Let's see...

Monday I took the dog to the vet (not exciting), Tuesday was our annual Block Party (I made some couscous), Wednesday was the Redmond chicken/duck meeting (look, John and I are in the background! That's me in the purple skirt!)

Thursday was my first day with nothing, and I took a nap. Friday was gardening with Shelley (more on that later; it involved some shrubbery demolition!) and yesterday? Yesterday we celebrated my mom's birthday: 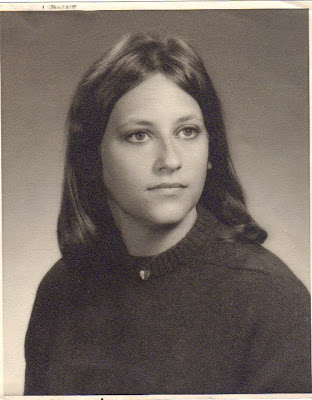 My mom in high school

I made her a yellow cake with chocolate frosting; just like she wanted (except she may not have known it was a vegan cake; not so much with the fudgy frosting though; more on that later too).
Posted by Dana, Founder of Crafty Cakewagon and The Creative Parent at 10:26 AM