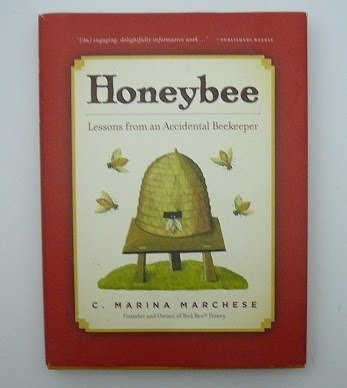 As you may or may not know, I've been thinking about keeping honeybees for a while now. It started last fall when we moved into our new(ish now) house, and I decided that we totally had a big enough yard for me to be able to do it. Then I took a class in February for my birthday, and learned about how expensive it would be to start up (between $500 and $700) and put it on hold for a little while. It's always been in the back of my mind though (that, and having a couple of ducks) but I recently decided that bees might not work so well in the part of the yard that I was imagining. (That and John keeps telling me that ducks and bees are mortal enemies, and have had "Fight Club"-type duels for years. "That's why ducks can fly you know. They used to be expert climbers and would get into the trees to get the delicious honey. Then they evolved a flight mechanism to be able to feed on the bees themselves!" You see what I have to live with.)

Anyway, I digress. Pretty much whenever I see a book dealing with bees or beekeeping, I pick it up. This time, I bought it. It's a memoir of a woman who started keeping bees, and ended up with her own honey company. So far I'm about 3 chapters in, and I'm really enjoying it. (Did you know that after honeybees sting, they release a hormone that tells the other bees that there is danger, and they should sting too? And that this hormone smells like bananas? She learns this after trying to start her first hive; after they attacked her instead of going into their new home.) I also like how much information there is about beekeeping, without being just a guidebook. I still would like to keep bees, but I'm thinking it might be a bit further down the line, after we've made the rooftop garden we have planned- then they'll get enough sun/shelter, and be less of a danger to nearby pets/people/toddlers/etc.

Posted by Dana, Founder of Crafty Cakewagon and The Creative Parent at 1:09 PM