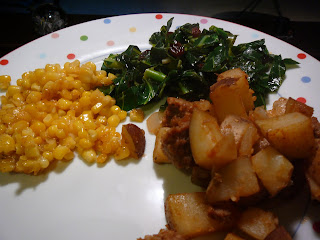 Ok, that's a lie. I might be accused of usually doing something resembling ONE of these things for a weekend breakfast, but three? That's just crazy! 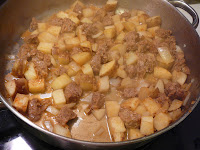 I confess, the corn pudding was a leftover from Thanksgiving that I hadn't cooked yet. (and if you didn't see my comment below, you can cook it at 400* instead of 350* for 30 minutes instead of two hours. Win!) This is my typical Spicy Potatoes, with a bit of veggie sausage (we call it "soysage") cooked in. Mmmmm... 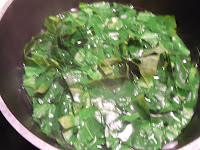 The Citrus Collard Greens were something I'd planned to make for our Thanksgiving III, but just didn't get to. They're from a recipe by Bryant Terry, and in Vegetarian Times this month-- really easy and tasty! (I think also in his book, Vegan Soul Cooking) Basically, rinse and chop up some greens, boil for a few minutes, and cook with 2 cloves of garlic, a little olive oil, 1/4 cup of raisins, and some freshly squeezed orange juice. Add a little salt and pepper, and you're done! 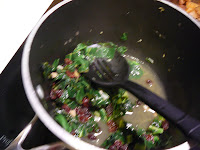 It looks out of focus because it's so steamy!
Posted by Dana, Founder of Crafty Cakewagon and The Creative Parent at 11:13 PM