I have been eating way too much lately. Too many cookies, too many sweets, giant dinners... Christmas was no exception. This is the one day a year that I make the sugar-encrusted monkey bread. (that's surprisingly vegan) Boy, is it tasty (and easy to make!). After this year though, I may never make it again... or at least will make a smaller amount!

Monkey Bread:
4 containers crescent rolls (the fun ones that pop when you open them)
1 stick margarine
1 cup pecans
1/2 cup raisins
around 1 cup brown sugar
copious amounts of cinnamon, 1 Tbsp plus more for sprinkling
In a small saucepan, melt the margarine on the stove. Add the sugar and about 1 tablespoon of cinnamon, and mix. Open up the rolls, and tear each "roll" into about 3 pieces. Roll them into a ball, and place in your greased baking pan. Make a layer along the bottom of your pan.
Meanwhile, toast the pecans in a shallow baking dish, at 350* for about 20 minutes.
Sprinkle the dough pieces with pecans, more cinnamon, and raisins. 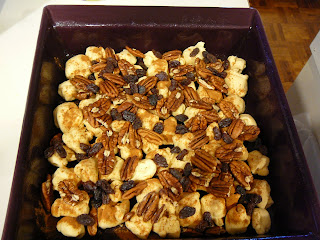 Then dot the whole thing with the margarine/sugar/cinnamon mixture. 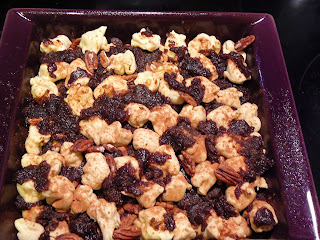 Repeat with another layer of bread pieces and sugar mixture. Bake at 375* for about 40 minutes; until the bottom layer is done and not mushy. If it looks like it's getting too brown on top and not soft, cover with some foil until the other pieces of bread are done. 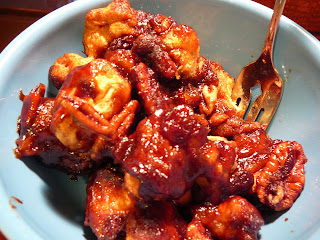 Mmmm.... Can you feel the cavities already?
Posted by Dana, Founder of Crafty Cakewagon and The Creative Parent at 10:11 PM