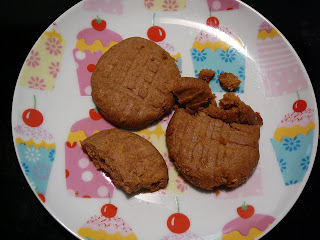 I really wanted some cookies the other night, but not too many. Then I thought, "Peanut butter!". These were from my favorite and most-used cookbook, despite the fact that I'm not actually vegan. I made half a recipe, just so we wouldn't stuff ourselves for days and days; it made 13 cookies, which was exactly enough. They were very tasty, but pretty fall-y apart-y (that's "crumbly" to those of you who are not English majors, and therefore, cannot make up words on a whim.) :) 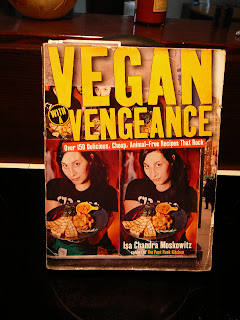 Since I didn't actually alter the recipe in any way (other than halving the ingredients) I don't think it's particularly legal for me to post it here. But, if you really would like it, I might be persuaded to email it to you personally. This cookbook really IS awesome though. I still haven't made even half the things in there, but it's totally worth it.
Posted by Dana, Founder of Crafty Cakewagon and The Creative Parent at 2:16 PM