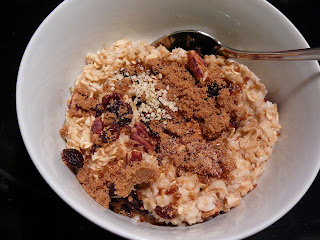 Ok, maybe not that many. When I was a kid, I used to LOVE to eat this hot cereal called Wheat Hearts. I would pretty much just have it with some margarine and brown sugar, and it was lovely. In college, I discovered it again, and would usually have it with some dried apricots. Now, I haven't seen this cereal in years; I think it's totally disappeared. (It is for sure NOT Cream of Wheat, which is disgusting.) So, now my go-to hot cereal is oatmeal. Not instant in a packet junk, but real oatmeal, that I still cook in the microwave.

One day, long ago (probably about 10 years or so) I saw Martha Stewart do a bit on hot cereals, and serving them to guests with a bunch of different things to mix in them; like a sundae bar for cereal. I thought it was fantastic, and it forever changed how I make hot cereal. I try to always have some sort of fruit, a type of nut, some cinnamon, and a few other things to make it healthy (ground flaxseed, and hempseed) and yummy (brown sugar... mmmm...). Here is what I've been having this week:

Put oats, fruit, and nuts in a microwave-safe bowl. Add water until cereal is covered, but only slightly (more for dried fruit, less for frozen fruit). Microwave on high for 2 minutes. Add sugar, seeds, and soymilk if it dries out too much.

The best thing about it is that you can change what you put in it, and it will be different every day. (and still good for you) Some ideas: dried cherries, dried apricots, craisins, walnuts, hazelnuts, almonds, pecans, coconut, dried mango, dried pineapple, fresh fruit, frozen berries, canned peaches... I even have a friend who puts in a swirl of peanut butter (although that doesn't really appeal to me that much.)

MMmmm... breakfast!
Posted by Dana, Founder of Crafty Cakewagon and The Creative Parent at 12:03 AM